Saint Vincent de Paul Parish was the only Catholic Church in the city of Elkhart from 1868 to 1949. With the Catholic population growing, Saint Thomas the Apostle Catholic Church was formed in November 1949 with Fr. James Elliott as its founding pastor. The first Mass celebrated took place on May 28, 1950, in what is now referred to as the “old gym”. Bishop Noll blessed and officially dedicated the new church and school on June 4, 1950.

Plans for a new church building started in the fall of 1960 with the ground-breaking on April 21, 1963. Father Richard Smith, associate pastor, led the ceremony. After completing the building the dedication Mass took place on June 7, 1964. It wasn’t until two years later that the beautiful mosaic, crafted of Venetian glass by artisans in Italy, was revealed.

The original adoration chapel, built in 1999 and located in the parish center, was relocated to the church in 2007. God willing, Saint Thomas the Apostle Parish will continue to flourish for many years to come. Deo Gratias. 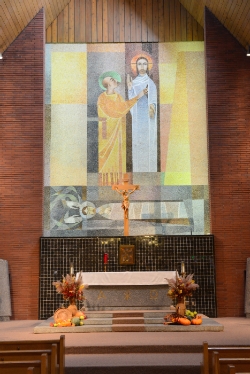 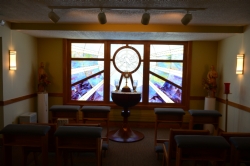 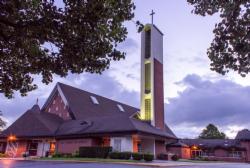